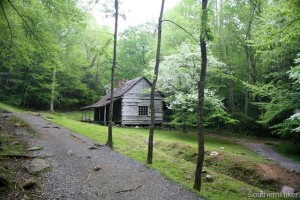 You don’t run into many ghost stories on the beaches of O’ahu, but for some reason, East Tennessee sure has a stockpile of them! Maybe it’s the cool climate of the mountains which draws spirits away from their otherworldly purgatory and back into our own Earthly realm. Or perhaps it’s just that more persons befall horrible outcomes in wild woods than they do on sandy shores? Shark attacks aside, that is.

Well, near the area of Roaring Fork road, Tennessee, we know for certain one old ghost isn’t coming back simply for the cool weather…

The year was 1909, just five years before the Great War and 24 years before the Tennessee Valley Authority started seeking ways to bring electricity to the rural folk such as those living in Gatlinburg. Thus candlelight was still the norm, and young Lucy, a girl of 17 by most accounts, was overly preoccupied with their hypnotic flames.

Fast forward a year, to her parents who became quite unsettled when a gentleman caller on horseback visited to inquire about seeing their daughter, whom he’d taken a fancy to after giving her a ride. She’d sprained her foot during a hike in the mountains, he said, telling them the tale of his meeting with her just the day before.

Foster, the man’s name was, told the bewildered parents of his concern that their beautiful young daughter might’ve taken ill, for her body temperature was apparently running very high. He knew that, he testified with hesitation, because she’d held tight to him as he rode her down from the range, stumped as to how a girl could otherwise not mind the winter chill. Surely she must be freezing, he’d imagined, and yet he could tell she was toasty as a tea kettle. In fact, her hands were downright hot.

“Our dear Lucy is dead,” said the father, tears welled in his crystal eyes, “and yet you are not the first rider to come to our cabin seeking her hand this year.”

Foster became clearly embarrassed, figuring the protective father was making up the story, trying to scare off another unwanted suitor. The cabin in question, noted Foster from his mounted perch, looked to be somewhat newly built (this he said by way of changing the subject as he sought a way to extricate himself before being shot by the dad).

“It is new,” answered the father, upon the inquiry. “We had it built after the last burnt down. With poor Lucy inside of it.”

And with that, the grey and withered husk of a man turned to point out his daughter’s headstone mere yards away, beside a diseased White Pine. Atop the stone rested a brand new candle, pointing in the direction of Roaring Fork–the road Lucy still hitches rides on today.

This article was posted in Uncategorized. Bookmark the permalink. Follow comments with the RSS feed for this post.Post a Comment or leave a trackback: Trackback URL.