The Ghost of Greenbrier Restaurant in Gatlinburg 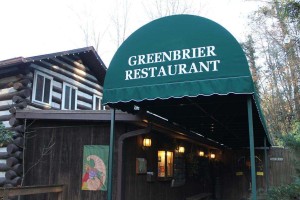 The Greenbrier Restaurant of Gatlinburg, Tennessee, offers the best brownie to be found in the Smokey Mountains. They call it ‘Lydia’s Chocolate Suicide For Two.’

Why so serious with the brownie name? Because it’s named after the ghost which happens to haunt the restaurant. You got it–“Lydia,” one of the most (in)famous ghosts in the state!

In the ‘30’s, the cliff-side steak and seafood diner was more of a secluded lodge, frequented by hunters from around the region. A reclusive young woman resided at the lodge, a “raven-haired” female of mysterious origins, whose full name has been lost to the sands of time. But she’s commonly known as Lydia (not to be confused with the ghost of a girl who died in the 1904 train wreck, of the same name).
The lady was engaged to a gentleman from town who, upon the intended day of their marriage, (and with Lydia done up in full matrimonial regalia and biting her nails at the altar) decided to blow off the ceremony and engage instead the fleshy services of a local prostitute.

Word reached the wedding party via a sympathetic barkeep from the town’s saloon, who was a friend of Lydia’s mother (some versions of the tale have it). And so the scorned young bride-to-be abandoned the church, and, they say, its Heavenly patriarch, as well.

For what our lustful bastard-of-a-groom knew not is the fact that Lydia, at least within the Lodge itself, was a well-known occultist and devout student of none other than Aleister Crowley. Magician and mountaineer, the infamous Crowley’s teachings hinged on two primary rules:

“Do what thou wilt shall be the whole of the Law,” and…“Love is the law, love under will.”
With those sacred pagan laws locked inside her bitter heart, Lydia returned to her second story quarters at the Lodge and immediately hung herself from the rafters.

Her betrothed had betrayed the Law of Love; so she took matters into her own frail hands, to do what she wanted…to have her revenge. Through death, it’s said, she was able to return and exact her vicious brand of justice…for the “gentleman” was found dead, brutally mauled by “some sort of mountain cat.” A coincidence, no doubt…yet Lydia made her continuing presence known by calling out from beyond her unmarked grave, begging for a proper burial and tombstone once the dirty deed was done.

These simple funeral requests she was, at last, granted–by the local caretaker who couldn’t bear her pitiful, ethereal pleas.

Even still, it is said Lydia has yet to find rest. The old Lodger continues to roam the second floor of her former abode, occasionally knocking over shelved items or appearing, for the blink of an eye, before a famished tourist as they prepare to bite into their rare and succulent T-bone…just as, you might say, she’d ripped into her cheating man’s own tenderloins.

This article was posted in Uncategorized. Bookmark the permalink. Follow comments with the RSS feed for this post.Post a Comment or leave a trackback: Trackback URL.